So, you are thinking about sending your child to private school. You know what you want your ideal school to do for your child's education and her development. The next item on your school selection punch list is figuring out which of the dozens of schools out there is the best one for your child and you. I wrote the following twenty-six articles with you in mind. We sent our two daughters to private school from their pre-school years through high school. I remember how little I knew about private schools. Back then I didn't know what to look for. I trusted the head of school and her teachers and expected them to give my daughters a solid academic education. That's how innocent I was! Of course, there's much more to finding a school. The following articles draw on my experience as a parent and a private school teacher and administrator.

. . .read more
5 Mistakes Parents Make When Choosing A Private School
Updated September 08, 2019 | by Robert Kennedy
Choosing the right private school for your child is a lengthy process. I want you to achieve the success which you deserve without making these common mistakes other parents have made.

Choosing the right private school for your child is a lengthy process. I want you to achieve the success which you deserve without making these common mistakes other parents have made.

1. Choosing a school which is not a good fit

You know your child better than anybody. Never forget that as you begin the process of choosing a school for your child. As you look at school websites, don't be distracted by those beautiful, professionally-produced presentations. Schools will show you what they want you to see. That's not a bad thing; however, those websites may not necessarily address your specific needs and requirements.  Many times during the process of researching schools you will receive false positives. It's hard not to be impressed by beautiful photos of a campus and its buildings, particularly if it is an older school with impressive grounds and architecture. But don't the cosmetics take your attention away from what is truly important, namely, the curriculum, the sports programs, and the extracurricular activities. Always be asking yourself "How does School X blend these three important components so that my child will benefit from attending this school?" As Geri Coleman Tucker wisely observes in 5 Mistakes Parents Make When Picking a School, "Sure, you want to pick a school that is clean and attractive, with all the newest technology. But remember that looks aren’t everything. Some schools might not have the latest and greatest equipment. But they have engaged and well-trained teachers who can

. . .read more
When Do You Send Your Child To Private School?
Updated February 19, 2018 | by Robert Kennedy
Think of the school search process as a series of checkpoints, each of which has a due date. We show you when to do the various items in the search process.

You have been thinking about private school for your child for some time now. Finally, you have decided to proceed. Naturally, you will have many questions about how to organize your school search process. Here are some answers to your questions about when to tackle the various steps in the school search process. I hope this will help you plan and execute the process efficiently and with a minimum of angst. If you want more detail on any aspect of the search process, start with How To Search For Schools.

When do you send your child to private school?

At what age to send your child to private school depends on several things. The first thing which you need to consider is the quality of the education available in your local public schools. No matter what grade you are thinking about, start with that consideration first. This step requires you to do some serious research and due diligence. Don't skip this research.

Begin with the school's reputation. You may have heard good things about a particular public school in your area. That's a start, but take time to look carefully at the school profiles in sites such as Great Schools.  Videos posted on YouTube by private schools will give you a useful point of comparison. Here is an overview of teaching Spanish at The Rectory School.

Then, the next step is to visit the school in person. You

. . .read more
Choosing Schools: Reach, Match and Safe Schools
Updated November 24, 2017 | by Robert Kennedy
Always answer this question honestly: what is the school looking for? Is my child a match for their requirements? This article shows you how to get that important match right.

As you begin thinking about private schools, you will add schools from various sources to your initial list of potential schools. That’s fine. Accept all suggestions and advice in the early stages of your search for the right school or schools. Friends will suggest schools which their children attend. Family will mention schools that your uncle or aunt attended. And so on. Finally, you will explore on your own. Private School Review is a great place to start because the site is devoted to private K-12 schools. The following screenshot gives you an idea of number of schools within a fifty mile radius of East Longmeadow, Massachusetts. (I selected that area because I am familiar with it as I have family there. Also itt is not a major urban area.) 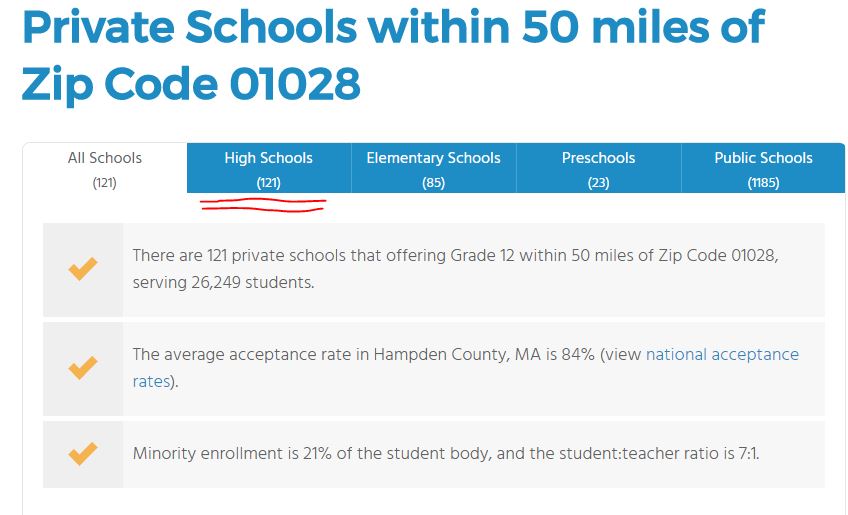 After exploring schools and including all the other suggestions you will receive, you will most likely end up with a list of 5-10 schools. Now, this is where the private school search process becomes tricky. Why is that? Simply because you have to whittle that long list of potential schools down to a more manageable list of 2-3 schools.  Selecting a school is not like buying a watch on Amazon. It’s a lot like buying a house. And just as with buying a house, you have to really like the house.

. . .read more
The A to Z of Private Schools
Updated April 05, 2018 | by Robert Kennedy
This A-Z list will help make you aware of the many things involved in choosing the right school for your child.

A - Applying to private school

Applying to most private schools has become infinitely easier in the last 10-15 years. That's because you can apply online at most schools. When school's don't have online applications, they usually have all the application forms you need online so you can download them easily.

B - Be aware that diversity is an important part of private schools in the 21st century.

Yes, back in the 1950's and 1960's you might have been able to say that private schools were elitist. At least that was the perception which the general public had of private schools. This perception, of course, was reinforced by the media. In the 21st-century, private schools have made diversity and tolerance the center of their mission and philosophy as most schools seek to prepare their students for life and work in a global community.

Many parents have grand ideas about which private schools they want their children to attend. As a result, they focus on the top 10 schools which receive 10 times as many applicants as they have places for. Having one very competitive school on your short list is a smart move when you also have two relatively safe schools on that list as well. Just as with investing, t makes no sense to put all your eggs in one basket. This brief video showcases Phillips Andover Academy.

D - Discipline is part of the deal.

. . .read more
View Pages:<<Prev  1 2 3 4 5 6  Next>>
Recent Articles
February 15, 2020
5 Facts about Montessori, Waldorf & Reggio Emilia Schools
We take a detailed look at the three popular early childhood methods to help you determine which one best suits your needs and requirements.
February 12, 2020
Running Your Private School
This article aggregates all the articles I have written about running a small private school. Use it as a handbook and a reminder of things you should look at from time to time.
February 06, 2020
The 21 Secrets of A+ Students
Ever wish you could pick the brain of A+ students? Well, we did it for you — we spoke with dozens of students and educators to find out their secrets for success.

Most Popular Articles
What is AP?
5 Facts About Montessori Schools
Average Private School Tuition Cost
5 Facts about Montessori, Waldorf & Reggio Emilia Schools
Why Did You Select That School?